Vague Ban Messages: Another Reason To Own Your Own Web Presence

It’s a month shy of four years since Google Plus (remember that service?) inexplicably banned me, then equally inexplicably reinstated my account.

Since then, things have only gotten worse.

I’ve seen friends get banned from social media sites for posts suggesting that "equality is a good idea" because they were targeted by loose-knit groups of right-wing asshats falsely reported the posts as offensive. The overwhelmed (and extremely traumatized) moderation teams are doing their best with the tools that they have. Even volunteer group moderators are swamped and develop burnout at a high rate, something I’ve seen firsthand.

It just reinforces the point I’ve been making for nearly a decade: that creators cannot rely on social media to be their main digital home. Whether you use more open standards like RSS or email, roll your own web presence, or just have a nameplate page (all of which serve as your digital business card), you cannot rely on a social media site to have your interests at heart.

The excuses I usually hear after that – where people rely on being able to avoid "objectionable" content, or quickly explaining it to a tech company if they get targeted by a malicious group – is a horrible assumption. Even with my own bad experience with Google in the past, I was still surprised to get this email from Pinterest earlier this year: 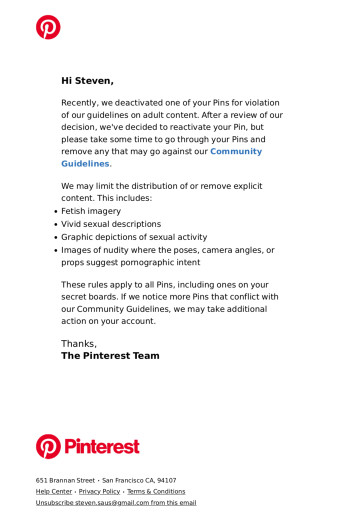 I have no idea what they’re talking about.

Let me repeat that, louder for those in the back. I have no idea what this email is referring to.

I haven’t posted anything to Pinterest in at least a year, and rarely even then. I do not know what pin they are referring to. My best guess is a pin on a private ("secret") board from 2016 that showcased tattoo art across someone’s chest. Probably. Maybe.

And that’s the problem.

For me, this is merely an annoyance. I rarely used Pinterest to begin with, and these days I mostly use a self-hosted instance of Pinry to save images for character references or Minecraft build ideas (check out /r/DetailCraft !). But if I was a visual artist, or someone who did use Pinterest as a marketing channel, I’d be shaking in my slippers.

There is a long history of uptight people finding classical art – including Michaelangelo’s "The Last Judgement" – obscene and immoral.

And with my example – presumably a six year old post on a private board being flagged when I’ve not used the platform in a long while – and now, with the weaponization of the "report" button… well, assuming safety through obscurity is a bad idea.

And relying on someone else’s platform to be your "main" home on the internet is just a problem waiting to happen.