Just Say No To Finger Sticks: My Experience With a Continuous Glucose Monitor

I had seen continuous glucose monitors (CGM) before. They’re the little circular things you may have seen on someone’s upper arm or abdomen. I always thought they were A Big Deal to insert and maintain.

Man, I haven’t been that wrong in a while.

Prior to CGMs, the only way for most people to check their blood sugar was through finger sticks and testing with a monitor like the one in the picture below (Photo by Diabetesmagazijn.nl on Unsplash)

There’s three huge drawbacks to this kind of monitoring. Remembering to check can be difficult, particularly if you need a spot check at an unusual time. The needles end up creating biohazard waste that you have to dispose of carefully. And, perhaps most importantly for someone who types as much as I do, sticking your fingertips with needles hurts.

A continuous glucose monitor solves those three problems. The one I’m using is the Freestyle Libre2, but other brands and varieties work in essentially the same way. The sensor portion attaches to your skin, and then communicates with the sensor or an app on your mobile device. There’s a detailed explanation of how they work (and the differences between a CGM and a FGM) at AgaMatrix, and both Medtronic and Abbot (have pretty good explainers about the features of their systems.

What they don’t feature is the actual applicator and application process. So I took some pictures when I last changed mine to show all of you.

Two things to say up front: 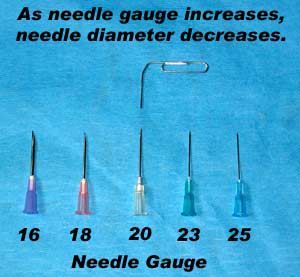 The application kit does look a little intimidating, but it’s really just two halves of the applicator. You take the two parts, line them up, and then push them together. When you pull them apart again, the applicator (with needle) is ready to go.

From there, you just push it onto your arm, hear a "click", and then pull it back away. The sensor stays on your arm with a pretty strong adhesive layer. You can shower, exercise, and generally go about your life normally afterward. You can find covers to go over the sensor, but they’re mostly there if you want to have a pretty sticker instead of a white disk.

The model I have is good for 14 days. At the end of that time, just pull gently from one end and it comes right off. You can clearly see the adhesive here in these pictures. Additionally, check out how it is not a needle in these pictures, as I can bend it (and you can even see that it does not have a sharp point).

In addition to being a lot fewer sticks (1 every two weeks instead of at least 3-4 a day), I also have the advantage of being able to see the real-time effects of what I eat and what I do on my blood sugar.

Just being aware of it makes a huge difference – after all, you can’t just measure when things are going wrong.

Having a continuous glucose monitor is something that I would encourage for everyone who needs to track their blood sugar. Aside from insurance, most companies (and definitely the two I linked to above) also have programs to increase access to this kind of medical care for all patients.

Your doctor may not be aware of the benefits or think to suggest it to you; be proactive with your health and suggest it to them.