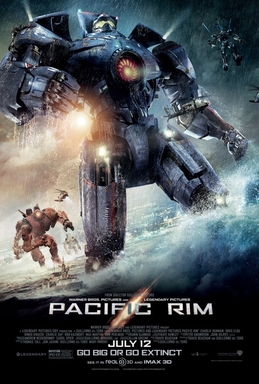 Pacific Rim is a thoroughly unsubtle film, and brilliantly gorgeous fun as it delivers EXACTLY what it promises.

It hits the ground running, and doesn’t stop.  And while the plot isn’t exactly a surprise, it’s so well-executed that you simply don’t care. (And yes, writers, that is how you do in media res when you have a complex backstory.)

Look at it this way:  You go to a concert to see your favorite band.  And they start playing your favorite song.  It’s gonna be pretty much the way you’re used to hearing it… but even though it’s not surprising, the way they play it is just simply worth it because it’s great.

Sometimes as writers we get down on “formulas”, and rightfully so.  But Pacific Rim demonstrates – and successfully so – that it’s not all about how clever your plot is1. It’s also about skill in pulling it off.  Guillermo del Toro and all the others who worked on this film pulled it off brilliantly.2

I recommend seeing it in theaters.

1 “How’s being clever working out for you?” – Tyler Durden
2 For the nitpickers – There’s only three scenes that clunked a little for me… and it would take more time to explain where they fall in the movie than it’s worth.